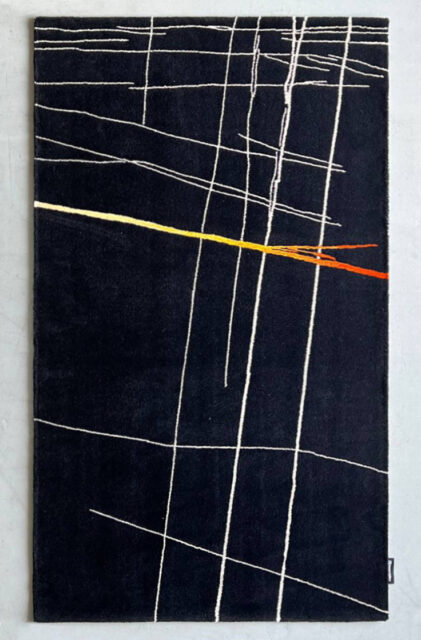 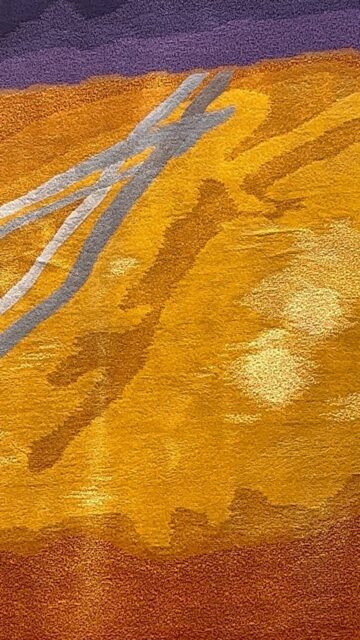 When the line between art and design starts to blur, works of art are born which speak the visual language of contemporaneity, The same language shared by Carpet Edition who, thanks to its innovative vision, has found a new way to convey the manufacturing ability of the company through collaborating with various international artists. Interest in the sphere of artistic disciplines led Carpet Edition to find out more about the latest trends in the visual arts, thus fostering the meeting and knowledge of Maria Thereza Alves (1961, Brazil).

Brazilian artist and activist, who currently lives between Naples and Berlin, whose career is marked by participation in numerous international exhibitions including the latest one – number 15 – from Documenta in Kassel (June 18 – September 25, 2022).  The international contemporary art scene at Documenta 15 in Kassel is the stage for the debut of the new collaboration between Carpet Edition and Maria Thereza Alves. Two rugs were presented: On Responsibilities Acquired while on a Stroll in a Garden in Europe and On the Need of Remembering Here before the Onslaught of There Began, both in wool and Tencel, with a diameter of 160cm and produced in 2022.

The fabric of the two rugs becomes fertile territory for a new woodsy environment: On the Need of Remembering Here before the Onslaught of There Began, recall the Atlantic Forest along the Atlantic coast of Brazil, now 90% destroyed by colonization.  What we see intertwined is no other than types of vegetation that have survived. The other, On Responsibilities Acquired while on a Stroll in a Garden in Europe, depicts flora including an oak tree, ivy, a Butia palm and a Poke plant. As in a walk in the pristine green areas of the Real Bosco di Capodimonte in Naples, originally established as a hunting ground, which still preserves 134 acres which house 400 plant species, Maria Thereza Alves leads the viewer to a more intimate dimension where references to a history we are all aware of are not lost, that of the Neopolitan territory and the Spanish dominance over it, but that – in some way – invades the personal life of the artist: the Butia palm is an explicit reference to her father’s roots.

The homage to contemporary art paid by Carpet Edition continues with two other rugs in which Maria Thereza Alves “together” with another artistic person very close to her: Jimmie Durham, LABINAC group member who passed away in November of last year. The ties between Maria Theresa Alves and the city of Naples are so strong that it becomes the setting for two different exhibitions: “Reflections on disturbances between boundaries” which, inaugurates the 2022/2023 exhibition season of the new Italian location of the LABINAC collective in Naples (starting January 19th, 2023) which will house, among other works, a rug produced by Carpet Edition and designed by Jimmie Durham; along with “Jimmie Durham. Humanity is not a completed project”, from December 23rd 2002 through April 10th 2023, and Museo Madre in Naples, a large retrospective dedicated to Durham with another Carpet Edition production.

“Reflections on disturbances between boundaries” in the new space in Via Crispi 69 features all of the members of the collective: Maria Thereza Alves, Jimmie Durham, Rosaria Iazzetta, Jone Kvie, Philipp Modersohn, Alessandro Piromallo ed Elisa Strinna, with a selection of objects that includes tables, chairs, beds, rugs, vases, lights and mirrors. Untitled by Jimmie Durham takes the graphic patterns recalled by the veining in stones and reproduces them in a very different medium: New Zealand wool and Tencel.  The geometric movement of the colored pattern of the stone, recreated in an all natural and spontaneous way on this surface, places the work in the sphere of new experiementation with materials.

Also in Untitled, exhibited at the Museo Madre in Naples, the exploration of materials is the cardinal element of the entire work: the idea of the rug (New Zealand woll, Tencel and linen), produced on the design of Jimmie Durham in collaboration with Carpet Edition, is to accurately reproduce the dimensions and graphics of the table, which is in dialogue with the textile production.  Following Jimmie Durham’s sketches to the letter, the viewer finds theirself in front of mirroring between the table and rug that engages the viewer by inviting them to interact with the work itself. This narrative of signs and experimentation with materials, approaches the philosophy of making which strongly recalls that of Arte Povera where the riappropriation of natural elements was possible through artistic practice.

He has been the recipient of many awards including il Leone d’Oro alla Carriera della 58. Biennial of Venice (2019).

Carpet Edition is a young brand, founded in 2005 in Collebeato (BS), thanks to the extensive experience of Indikon in the production and distribution of rugs.  While preserving a rich history, consisting of family memories, travel, ancient production techniques and extraordinary craftsmanship, Carlo and Valentina Erba have been able to embark on a path of continuous innovation by collaborating with well-known designers and offering versatile, customizable and eco-sustainable products.