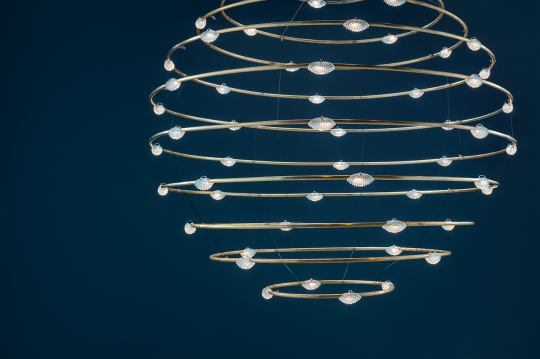 56 Petits Bijoux by Catellani & Smith is the representation of ‘static movement’, the effect of an action that seems to imitate the gesture of throwing a stone into a pool of water, creating concentric waves that propagate into space. The concept of a sphere, the circle as a metaphor for the infinite and perfection, are popular and recurring themes within the lamp collections produced by Catellani & Smith, which is celebrating its thirtieth anniversary, and return, in this new pendant lamp, a lamp that is remarkably simple in its design but extraordinary in its workmanship.

The structure of 56 Petits Bijoux is made up of a series of circles, some small, some large, held together by thin cables, which follow each other in succession to create a delicate, almost destructured sphere of 120 cm. Loose silicon ‘pochettes’ shield 56 LEDs for a total of 6720 lumens – which ensure very high luminous efficacy – flooding the natural brass circles with light, like celestial bodies following their orbit.