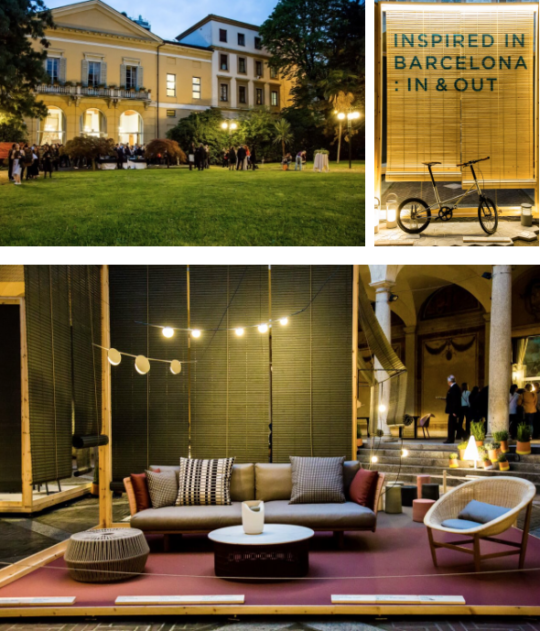 The “Inspired in Barcelona: in & out” exhibition, organised by Catalonia Trade & Investment and BCD – Barcelona Centre de Disseny, from 4th to 9th April in Milan, was a great success. This project, involving Catalonia’s best companies and most important designers, grabbed the attention of some 6,000 visitors during a week packed full of events at Milan’s “Fuorisalone”.

The exhibition was held at the prestigious Palazzo Isimbardi, where around 80 selected products were the stars of the show, all representing the creativity and potential that a large city like Barcelona has to offer.

Barcelona’s design is pervasive and rooted on more than one level, which can be seen even by just walking around the streets: benches, lighting systems, pavements, bus shelters and green areas are all a clear demonstration of how every single detail is studied with great care and attention to quality, in terms of both aesthetics and functionality. This same care and attention is to be seen inside homes, with furnishings bringing together Mediterranean creativity with some of the most innovative international trends.

Emiliana Design Studio, curator of the exhibition, recreated an incredibly evocative atmosphere inspired by life in the city, involving the visitors along an “in and out” path among light installations, “rooms” that brought to mind a welcoming home environment, and the internal courtyard of Palazzo Isimbardi, transformed into a crowded “plaça” and, at the same time, an intimate patio area.

The results of the initiative were met with great enthusiasm, as reflected by the comments made by Luis Polo, director of ACCIÓ Milan | Catalonia Trade & Investment:

We’re really satisfied with the results achieved by the ‘Inspired in Barcelona: In & Out’ exhibition. This is the first time that we’ve organised an event for the Fuorisalone with the objective of promoting our Region’s design industry, which is very closely linked to modernity and Mediterranean style. These are the values that Italians, as well as international audiences, associate with the city of Barcelona.

We wanted to transmit this identity to the public, the idea that Catalonia is a ‘cradle’ of creativity and that Barcelona is one of the global capitals of design. To do this, we had to somehow be present in Milan with a “cultural” exhibition rather than just a commercial one, supporting our companies that already take part in the trade fair on an individual basis and that often organise other events in the city. Considering the positive feedback from the press, the warm reception from the city itself, with a high and varied turnout, and the backing from the Catalan companies, all that’s left for us to do is to hope that we can repeat the event next year, perhaps at the same place, without excluding  other locations.

Strengthening our presence in the Fuorisalone programme of events is one of our top priorities.

The ‘Inspired in Barcelona: In & Out’ exhibition was a success in every sense. The 80-plus companies and designers that took part, together with the exhibition concept created by Emiliana Design, and the captivating graphics by Clase BNC, allowed international visitors to experience the values, excellent standards and lifestyle that Barcelona has to offer.

After this first experience at Milan Design Week, the positive feedback from the companies that took part and the more than 6,000 visitors to the exhibition, we would now like to continue this initiative which, in only six days, managed to show the world the creative potential and design innovation of Barcelona and Catalonia.