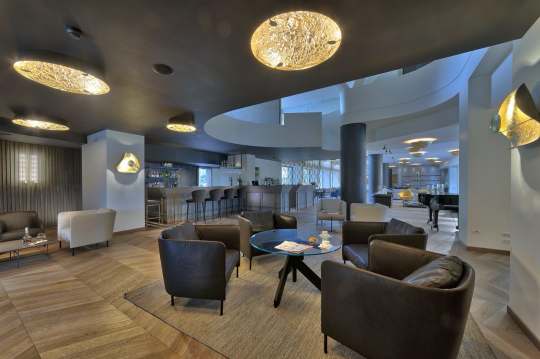 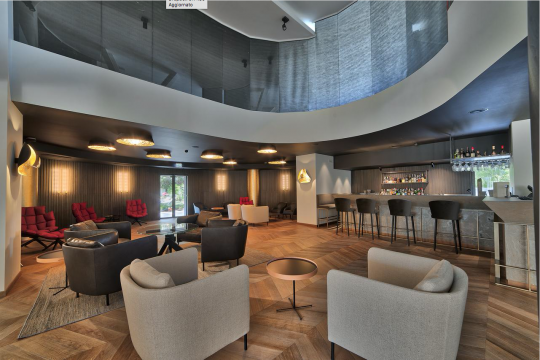 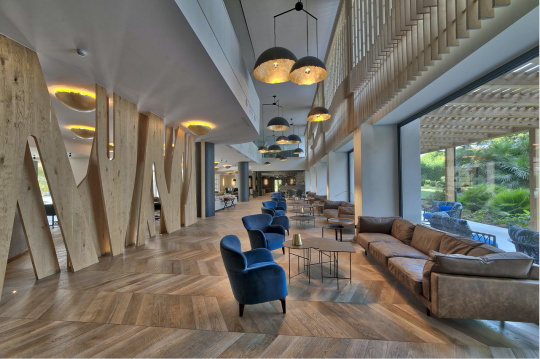 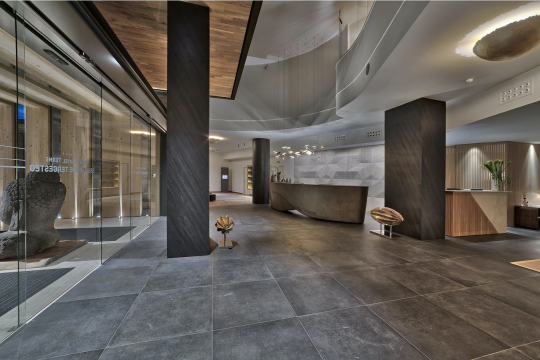 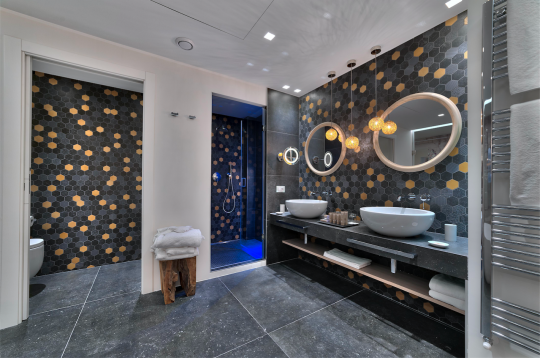 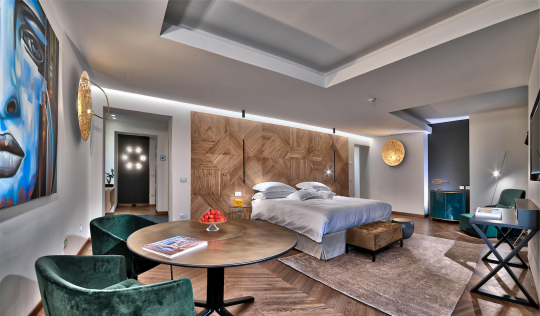 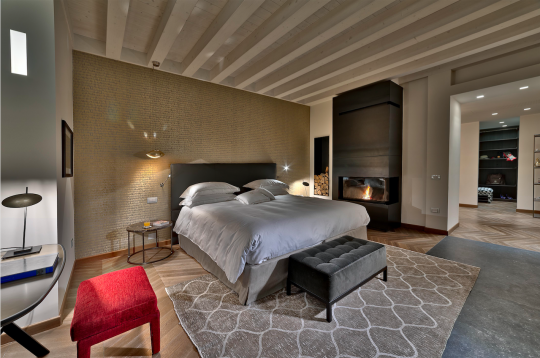 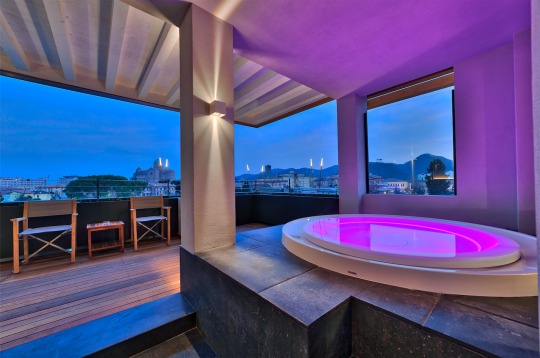 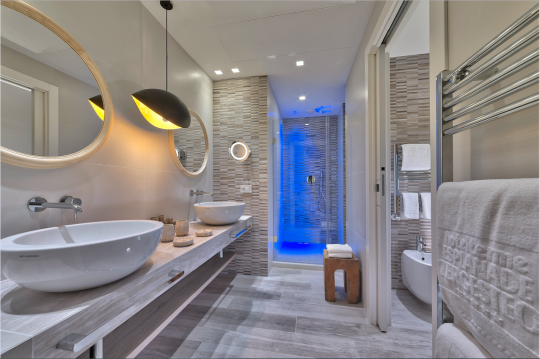 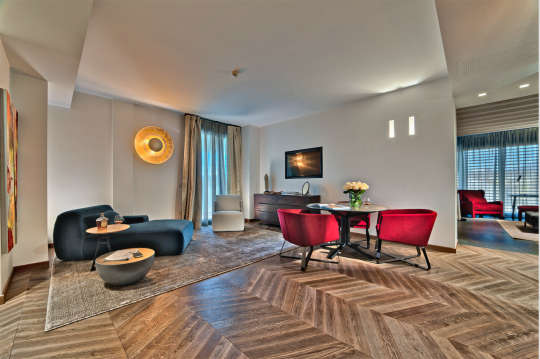 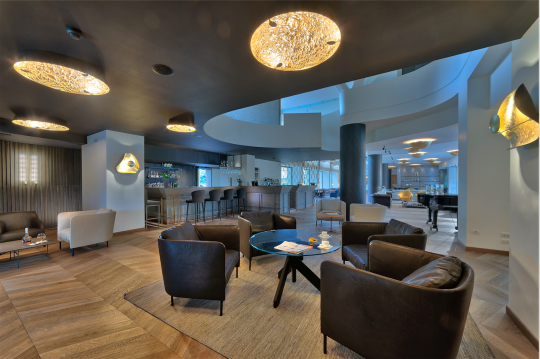 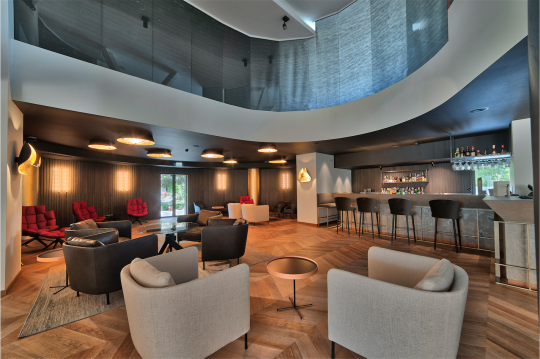 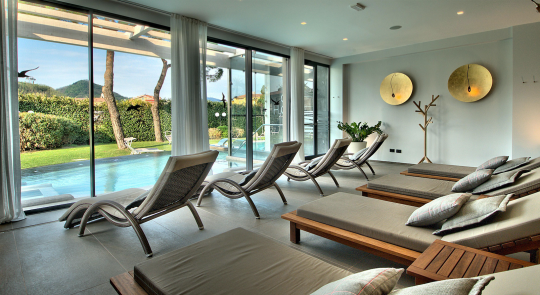 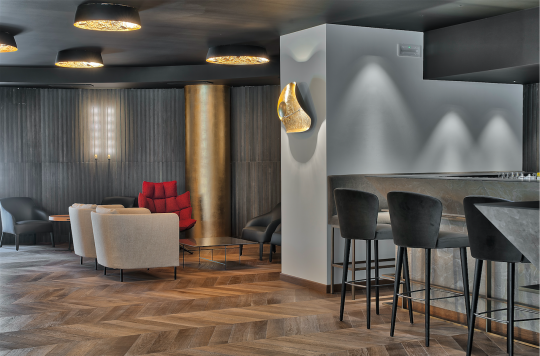 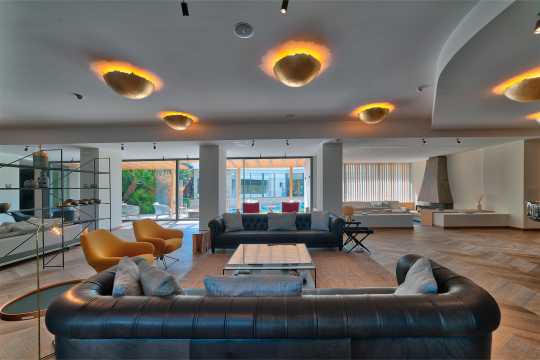 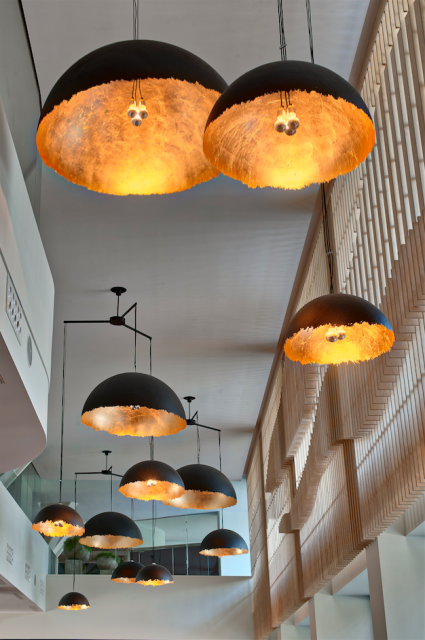 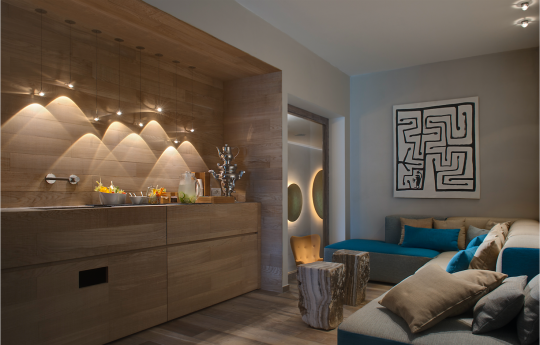 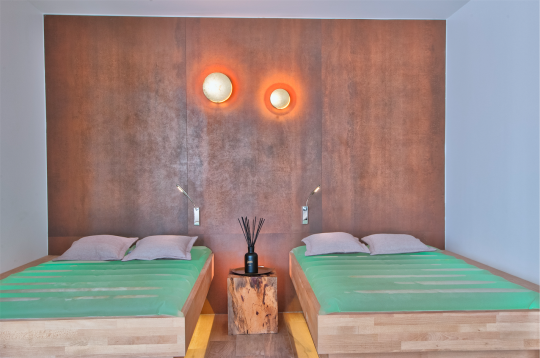 Surrounded by the natural beauty of the Euganean Hills, the Thermae Abano and Montegrotto are considered the largest thermal complex in Europe. The SPA & Hotel Terme Esplanade Tergesteo is set in such a context of relaxation and wellness treatments and it has always been a reference point for the guests of the Euganean SPA for its exclusive accommodations and wellness programs. The Hotel Esplanade Tergesteo renewal program, which has included the restyling of the rooms and the addition of new services for a 360-degree sensory experience, has recently focused on the redesign of the lobby, reception and lounge bar areas.

The lamps by Catellani & Smith have been chosen to light up the new spaces, to give character to the ambience and enhance the minimal style of the rooms, achieved by the use of both natural materials and refined furnishings in sober nuances.
A Gold Moon Chandelier that ‘overhangs’ the large reception desk, composed of golden discs with an irregular surface, placed at different heights, welcomes the guests of the hotel. Towards the lobby, which is divided into two distinct areas, a series of PostKrisi CW 70 wall lamps, made of a metal structure and fiberglass shades, seem to ‘chase’ each other on the ceilings, where they create an extraordinary visual effect made of jagged circles of light.

The same setting is replicated by a row of PostKrisi lamps in a custom version, consisting in three hemispheres in different diameters, whose inner surface is finished in gold-coloured leaf.
The same lighting concept is repeated in the semi-recessed Stchu Moon custom series that illuminates the new lounge bar: covered in gold-coloured leaf, these Stchu Moon lamps play with light, which is refracted off deliberately irregular surfaces, to multiply its ‘magic’ effect, making the entire object a glowing light.

Lederam Manta, finally, with its sinuous and voluminous structure, well complements the lighting of the lounge area and adds a touch of warmth thanks to its golden finish, while LED modules, hidden by its aluminum discs, seem to ‘embrace’ light and create an interplay of shades.

The presence of Catellani & Smith lamps is found not only in the new spaces of the hotel, but also in the areas dedicated to wellness treatments. In fact, several half-moon-shaped Stchu Moon lamps and golden discs of Lederam lamps shine bright on the walls. Many Lucenera floor lamps, which produce a directional and adjustable beam of light, have been placed next to the beds and chaise longue used by the guests of the SPA, to make them enjoy an intimate atmosphere. Even in some bedrooms, as well as in private bathrooms, the light by Catellani & Smith dominates the ambience with lamps such as Macchina della Luce, Full Moon and other models, such as Sorry Giotto and the stylish Lederam, which distinguish themselves for their minimal design.