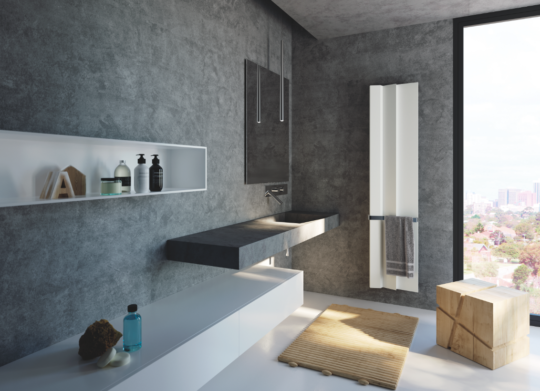 Antrax IT has received a major new international accolade. Android, the radiator brought to life thanks to the creativity of Daniel Libeskind has been bestowed with the prestigious Iconic Award 2017, in the Product section.

The result of an initiative by the German Bundestag and sponsored by German industry, the Iconic Awards 2017 promote quality of domestic spaces through design products.

An international jury, consisting of experts from the world of design, furnishings and journalism, picks out the best products in terms of concept, innovation, design and functionality. The aim of the Iconic Product Award is therefore to combine the world of architecture with the world of interior design, a project which the German Design Council has always supported and promoted.

The Android designer radiator constitutes the most iconic product brought to life by the designing experience of Antrax IT. Designed by Daniel Libeskind, Android is an aluminium radiator with sculptural features and sophisticated technology, affording high heating efficiency. Its volume takes shape from the unexpected geometrical facets made from a sheet of paper folded over itself, with the resulting design providing a dynamic sequence of angles and lines obtained from a thin ‘metal page’.

Android can be installed both horizontally and vertically, it is produced in over two hundred colour variants and it can run on water or electricity, with visible or remote valves; it is also available in the Android IQ version, with a particular slanting to the profile bar cut.

The Iconic Award 2017 is further confirmation for Antrax IT as to its expertise in manufacturing products capable of combining design innovation and styling, thereby establishing the value of the radiator in contemporary interior furnishings, as a design object which goes far beyond its mere function.

Antrax IT transforms elements, devised to heat spaces, into genuine items of interior décor, which not only play their principal role of producing heat, but also enhance the value of the interiors, whether they are placed in a living room or a bathroom setting.